English (Closed Captioned)
101 Dalmatians was planned since September 1998 for this VHS release on March 9, 1999. Disney claimed that 101 Dalmatians will be available for 101 days, until June 18, 1999, when Tarzan gets released in theaters.

A Limited Issue DVD was released five months later, and was discontinued in January 2000.

During this time, 101 Dalmatians' copyright term was 57 years from publication, one year more than it had when it first hit theaters in 1961.

Full of boundless adventure and boisterous fun, Disney's 17th animated masterpiece is the original film classic starring 101 of the world's most lovable, huggable Dalmatians and their hilariously evil captor, Cruella De Vil! A charming London neighborhood is home to Roger and Anita, whose beloved Dalmatians, Pongo and Perdita, have become the proud parents of 15 puppies. But when Cruella and her bumbling henchmen, Horace and Jasper, unexpectedly appear, the pups soon disappear -- along with every other Dalmatian puppy in town! Now Pongo and Perdita must rally their animal friends and use the power of the "Twilight Bark" to find Cruella's secret hideaway and free the puppies. Featuring the unforgettable, toe-tapping song "Cruella De Vil," 101 Dalmatians is one of the most cherished and sought-after Disney classics of all time -- and among the last films to bear the personal touch of Walt Disney.

On later copies a preview for a Bug's Life says Coming to video April 20th! 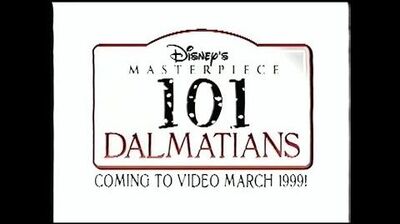