In August 2012, 101 Dalmatians was released on Blu-ray Disc. The North American version was first unveiled on August 27, 2014, with a release date of February 10, 2015 as the next Diamond Edition title.

It disappeared into the Disney Vault on February 10, 2017, exactly two years after release.

Pick your favorite spot to watch -- anytime and anywhere -- and get ready for a fun-filled adventure with 101 Dalmatians for the first time ever on Blu-ray and Digital HD! Pongo, Perdita and their super-adorable puppies are in for thrills, hilarious spills and an epic action-packed adventure when they face off with Cruella De Vil, Disney's most fabulously outrageous villainess. Unleash all the excitement and suspense of Disney's 101 Dalmatians, a beloved classic you'll want to share with your family again and again! 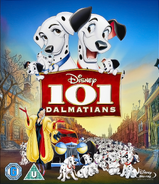 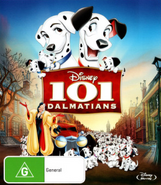