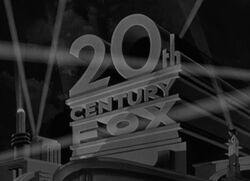 This logo was also seen on both Home Alone films when they aired on HBO and Cinemax from 1992 to 1995, and their network television counterparts as well, on NBC, FOX, TBS, Cartoon Network, FX, ABC Family, and several other networks.

The first film with this logo premiered on FOX on February 11, 1997, and was later seen on many over-the-air and cable networks throughout the years, especially on Spike TV, where the original Star Wars trilogy most recently aired.

As of March 21, 2019, 20th Century Fox has now been owned by The Walt Disney Company. This resulted in a loss of one major film studio from Hollywood. The last R-rated film from 20th Century Fox before Walt Disney Studios Motion Pictures took over was Widows, which was released on November 16, 2018.

Blue Sky Studios is the main distributor for family-oriented animated films from 20th Century Fox. Prior to Disney's acquisition, the studio has distributed 12 films, each within one different calendar year.

A lot of events occurred to Blue Sky Studios' films alongside production of My Little Pony: Friendship is Magic.