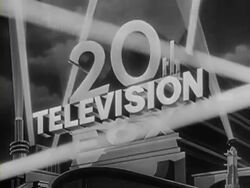 This logo resembles its film counterpart from 1935-1966. However, the world "Television" now plasters over the word "Century". Shows with this logo include Dobie Gillis on CBS and 12 O'Clock High on ABC, but often times, newer logos might appear instead in most cable networks. 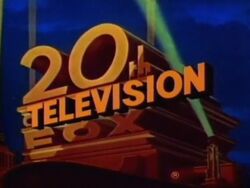 The TV counterpart of the 1953-1987 logo isn't easy to find as the film version at all. Shows that had this logo include Daniel Boone on NBC and M*A*S*H on CBS, but nowadays, most cable networks now show the current 20th Century Fox Television logo on reruns of these shows. 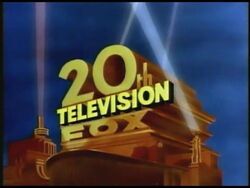 As of 1995, 20th Television is now a television syndication company, as some of its shows were not necessarily distributed by 20th Century Fox itself. Shows with this logo include reruns of South Park episodes on the CW Network and WGN America, and the first two seasons of The X-Files on the Fox Network, where it originally aired. 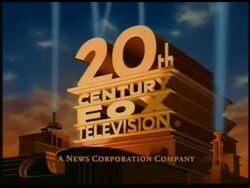 On April 28, 1995, 20th Television Fox was re-established as 20th Century Fox Television, and the ownership of all of Fox's programs were retained by this company from 20th Television.

The logo appears on current programming of shows distributed by 20th Century Fox Television. It can be seen on The Pretender (1996) on NBC, Malcolm in the Middle (2000), Futurama (1999), Family Guy (1999), and many other shows, old and new, from the original Fox Network to basic and digital cable networks such as Nick at Nite, Adult Swim (in the case of Futurama and Family Guy airing reruns there beginning in 2003), Comedy Central, IFC, and TeenNick. The logo was also retained on FX reruns of Malcolm in the Middle when it aired there from 2007–2011.

As of 2013, with 20th Century Fox Television no longer a News Corporation company, it is now affiliated with 21st Century Fox. The bylineless logo can be seen on the X-Files revival series, which premiered in early 2016, with a new season premiering in 2018, as announced in April 2017.