In a place called Ant Island, there lives a group of ants. Their job is to collect the food for the grasshoppers, but a sort of clumsy ant named Flik accidentally tips the rock under the food, making it all fall down into the water. Upon noticing that their food has disappeared, the grasshoppers show up and warn the ants that they will come back at the end of the last season, when the last leaf falls. And it's all because of Flik. The ants send him away to find circus bugs. As he does so, he invites them to the island. But when they leave, they see a bird's nest, which can only mean one thing -- a snack for one hungry bird. When Flik notices that Hopper's afraid of birds, he and the other ants make a bird out of leaves themselves. Unfortunately, Flik ends up lying to everyone, so he and the circus bugs are ordered to leave and not come back... until they had to because the grasshoppers were coming back to eat everything. When one of the bugs performs the flaming death at the bird made out of leaves, the grasshoppers want to know whose idea it was. They find out that it was Flik. A rainstorm begins, and the grasshoppers run away. Later in spring, all is well again. 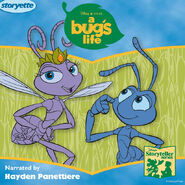 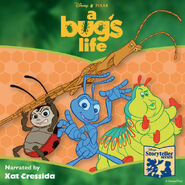