English (SDH), French, Spanish
The 12th (and final) Diamond Edition title from Walt Disney Studios Home Entertainment, Aladdin, was released in October 13, 2015, as announced on February 1, 2015 via YouTube and on many Disney titles on DVD and Blu-ray Disc.

Before this, the film was released in Europe in 2013.

Disney's beloved masterpiece will make your heart race and your spirit soar. Experience the laughter, adventure, and Academy Award-winning music (1992: Best Music, Original Song, "A Whole New World," Original Score) for the first time on Blu-ray and Digital HD. And now Aladdin shines even brighter with never-before-seen tributes to the enchanting talent of Robin Williams, the "Genius behind the Genie." 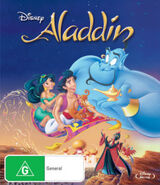