A dazzling blend of fantasy, animation and music create a kaleidoscope of adventures in this color -- splashed Disney classic, based on Lewis Carroll's immortal story. On a golden afternoon, young Alice follows a White Rabbit, who disappears down a nearby rabbit hole. Quickly following him she tumbles into the burrow -- and enters the merry, topsy-turvy world of Wonderland! Memorable songs and whimsical escapades highlight Alice's journey, which culminates in a madcap encounter with the Queen of Hearts -- and her army of playing cards!

The Buena Vista logo is also not seen in this video, just like in the English-language version from 1986-1991.

While this VHS went on sale, Alice in Wonderland returned to the Disney Channel and aired four times in October 1995, and lots of times from December 7, 1997 to March 4, 1999. 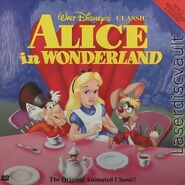 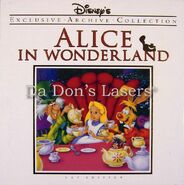