Alice in Wonderland
The Masterpiece Edition

The Lion King 1½
On October 9, 2003, Disney unveiled the 2-Disc Masterpiece Edition DVD of Alice in Wonderland. The DVD was released on January 27, 2004, replacing its Gold Collection counterpart.

Experience the magic, fun and adventure of Alice in Wonderland like never before in this new Masterpiece Edition 2-Disc set. Join Alice as she falls into the madcap world of Wonderland and meets extraordinary characters such as Tweedledee and Tweedledum, the Mad Hatter, the Queen of Hearts and the frantically late White Rabbit.

And the fun continues with new bonus features including the Virtual Wonderland Party, the newly discovered Cheshire Cat song "I'm Odd," Mickey's Thru the Mirror animated short, plus sing along songs and all-new games. Your family will want to experience this timeless Disney masterpiece again and again! 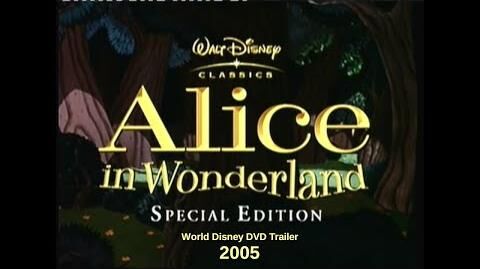 Retrieved from "https://retromedialibrary.fandom.com/wiki/Alice_in_Wonderland_(Masterpiece_Edition)?oldid=71025"
Community content is available under CC-BY-SA unless otherwise noted.