November 5, 2010
Applebuck Season is the fourth episode of My Little Pony: Friendship is Magic.

It's Applebuck Season in Ponyville and a short-handed Applejack is determined to complete the harvest all by herself.

Applebuck Season was one of the first nine episodes initially planned for the show prior to October 2009, with the first working title "Applebonk Season", later re-titled "Applebump Season". It was also listed as #4 in the writing schedule since October 13.

This was also the very first episode to have an outline, or the first full summary of a story for each episode, since October 21, 2009.

Storyboarding began on February 1, 2010, and the completed animatic was submitted for review on March 30, 2010, with network responses sent on April 6.

The client cut was submitted for review on August 4, 2010.

Production was officially complete on September 16, 2010.

This episode features the following characters:

DVDs with this episode: 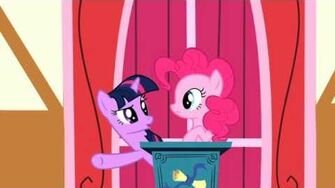 Retrieved from "https://retromedialibrary.fandom.com/wiki/Applebuck_Season?oldid=72269"
Community content is available under CC-BY-SA unless otherwise noted.