English (Closed Captioned)
After its last theatrical re-release on July 15, 1988, Bambi was released on home video on September 28, 1989. The film, once again, is presented without its original RKO Radio Pictures or a Buena Vista Distribution logo.

Bambi sold about 9.8 million copies during the 1989-1990 season. It was later withdrawn from sale as of April 30, 1990, just before The Little Mermaid was released on VHS. 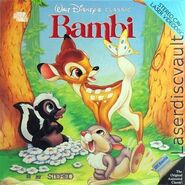