The VHS was the first Disney VHS release to be THX-certified.

Reflecting an age of innocence and a time of wonder, no film better captures the pure magic of Disney than "Bambi" -- the world's most endearing animated tale about the beauty of nature and the miracle of life. Nominated for three Academy Awards®*, this immortal blend of classic storytelling and unforgettable characters is most fondly remembered as Walt Disney's all-time favorite picture.' Fully restored to its original theatrical splendor, this digitally remastered video edition of "Bambi" can now take its place among your most cherished family keepsakes. Relive Disney's extraordinary movie masterpiece.

While the video was discontinuing, Bambi aired on the Disney Channel in this format from January 31 to April 27, 1998. 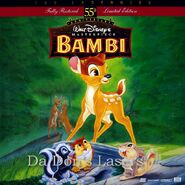