Beauty and the Beast

This synopsis came from the October 17, 2003 revision of the original Wikipedia article.

When a prince refuses to let an ugly woman enter his castle with only a rose as a gift, she reveales that she was a powerful enchantress and finding no love in the prince's heart, transforms him into a beast and turns the servants in the castle into tea cups, cloaks, candles etc. This spell can only be broken if the beast learns to love and receives her love in return by his 21st birthday. The "Beauty" part of the title, a member of French provential village, named Belle is the daughter of a rather loony inventor. She works hard to avoid the unwanted attentions of Gatson. When Maurice, Belle's father, takes his latest invention to a fair he gets lost in the woods and finds the Beast's castle, where he is made the Beast's prisoner. Belle is taken to the castle by her father's horse and offers to take the place of her father and the Beast agrees and sends Maurice back. Maurice tries to tell people back in the town what has happened to Belle, but they think him insane, so decides to set off to get her back on his own. Meanwhile, Belle and the Beast fall in love and the Beast becomes more human. When he gives her a magic mirror that will allow the person to see anything they wish to see. She reqests to see her father and sees him sick and dieing. The Beast releases her to go rescue him, and she takes her back to their house. However, Gaston arrives with a lynch mob to take Maurice to the asylum unless Belle agrees to marry him. Belle proves her father sane, by showing them the Beast with the magic mirror. However, Gaston convinces the mob that the Beast is threat to the comunity and leads the mob to the castle. Most of the mob is fought away by the enchanted artifacts of the castle, but Gaston reaches the Beast and begans to fight with him, though the Beast dosen't fight back untill Belle shows up. After Gaston is killed, Belle tells the Beast she loves him, and the spell is broken. The Beast turns into a handsome prince again and the enchanted artifacts of the castle are turned back into people. 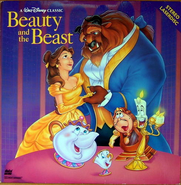 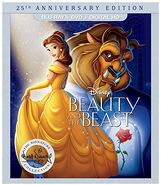 Retrieved from "https://retromedialibrary.fandom.com/wiki/Beauty_and_the_Beast?oldid=67524"
Community content is available under CC-BY-SA unless otherwise noted.