English (Closed Captioned)
After its final theatrical re-release on November 20, 1987, and as announced on July 29, 1988, Cinderella was released on home video for the first time on October 4, 1988, and like other Disney films, we don't see the RKO Radio Pictures or a Buena Vista Film Distribution logo. There was another animated film that was re-issued before Cinderella in 1987 titled The Aristocats, but unlike Cinderella, it didn't get a VHS in 1988.

There was a demo version of the tape that had the 1984 Walt Disney Classics logo, marking the logo from 1984-1988. What's even weirder to know is that the trailer for Oliver & Company indeed has closed captions, despite the greenband screen.

The November 23, 1988 broadcast of Star Wars Episode IV: A New Hope on CBS advertised this film on video.

Cinderella sold over 7.2 million copies during sales through April 30, 1989, when the video was discontinued in North America.

Foreign sales of the video began in 1992, a year after its last theatrical re-issue in July 1991. 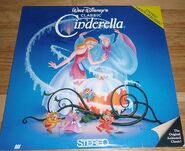