English (Closed Captioned)
As announced on May 22, 1995, Cinderella was re-released on VHS as a Walt Disney Masterpiece Collection title on October 4, 1995. It sold more than 7 million copies in its first two weeks, then more than 10 million in one month. Sales of this video ended in 1996.[1]

The most celebrated of all the Disney classics, Cinderella is also known as one of Walt Disney's all-time favorite films. In the magnificent tradition of Snow White and the Seven Dwarfs, Cinderella has enchanted generations with its spellbinding story, charming music, and endearing characters that live in your heart forever. The beloved fairy tale becomes pure Disney magic as beautiful Cinderella shares her dreams of romance and a better life with the lovable mice Gus and Jaq. When Cinderella's cruel stepmother prevents her from attending the Royal Ball, the delightful Fairy Godmother appears! With a wave of her wondrous wand and a bouncy "Bibbidi-Bobbidi-Boo," the Fairy Godmother transforms a simple pumpkin into a magical coach -- and Cinderella's rags into a gorgeous gown. At the ball, Cinderella falls in love with Prince Charming, but must flee before the stroke of midnight breaks the spell! Fully restored and sparkling with heartfelt emotion, captivating comedy, and delightful adventure, Cinderella's timeless tale of how dreams can come true is now "even better than you remembered it!" Joel Siegel "Good Morning America"). Treasure it ... happily ever after!

Earlier copies of Cinderella did not exist the promo for the Pocahontas video games. A Teaser trailer for Toy Story and Walt Disney Masterpiece Collection promo is different.

After moratorium, Cinderella premiered on the Disney Channel in this format on January 12, 1997 and aired there for three months. 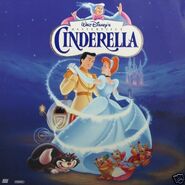