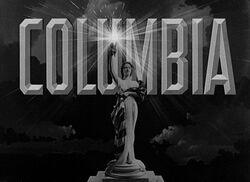 A widescreen version of this logo debuted in 1953.

These films, originally released on VHS by Columbia Pictures Home Entertainment from 1979 to 1980, contain this logo:

The first film to use this logo was Murder by Death (1976), and can also be seen on these movies originally released on VHS in November 1979:

The logo made its home video debut on the Robin Hood: Men in Tights VHS on January 12, 1994. As of May 3, 1996, starting with The Craft (1996), the byline "A Sony Pictures Entertainment Company" appears under the logo. It was then changed to "A Sony Company" in 2013 with American Hustle.

All animated films starting with Arthur Christmas (released in theaters on November 11, 2011) and on DVD and Blu-ray Disc starting with The Pirates! Band of Misfits (released on August 28, 2012) had the first logo, while the second SPA logo was first seen on Spider-Man: Into the Spider-Verse (released on December 14, 2018).

The Rovio Entertainment logo can be found on The Angry Birds Movie (2016).

A lot of events occurred to Sony Pictures Animation's films alongside production of My Little Pony: Friendship is Magic.