Can you save Mario's girl from the clutches of Donkey Kong? Donkey Kong has kidnapped Mario's girlfriend Pauline and taken her to the top of a construction site! It's up to you to help Mario save Pauline before time runs out. But it won't be easy. Donkey Kong will do everything in his power to stop you. He'll throw barrel bombs, flaming fireballs and anything else he can get his hands on. So if you're looking for action, don't monkey around. Get the original Donkey Kong from the Nintendo Arcade Classics Series.

In 1988, this game was re-released with Donkey Kong Jr. in a 2-in-1 video game cartridge titled "Donkey Kong Classics". The music originally from the first Donkey Kong game will play upon turning the NES on.

50m, the pie factory level, was removed from the NES version due to the cartridge's memory size limit. 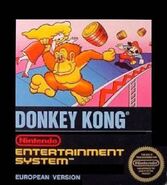 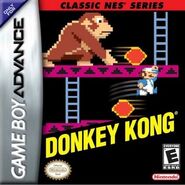 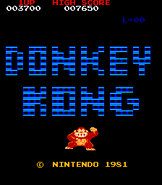 How high can you get? 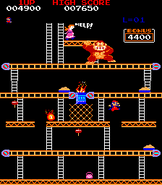 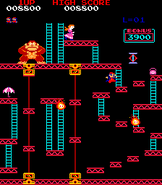 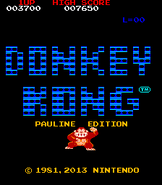 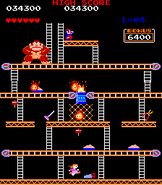 The "Pauline Edition" of Level 2.

The title screen was uploaded to The Video Game Museum in February 2001, and two of these screenshots (Levels 2 and 3) were uploaded in late 2001.

Most of these screenshots were uploaded to TMK on September 13, 1999.