Look out for flying coconuts! Donkey Kong is on the loose! Donkey Kong is at it again! This time he's loose in the greenhouse. And he's got company: a swarm of very pesky bees. It's up to you to get Donkey Kong out of the greenhouse and exterminate the bees -- without hurting the flowers. But that's easier said than done. Because Donkey Kong has plenty of coconuts to hurl at you, and those bees know just where to sting you so it hurts. But if you keep your wits about you, you'll score lots of points and have lots of laughs in the best Donkey Kong of them all -- Donkey Kong 3.

As Stanley dies, all the other insects swarm and finish him off. This was removed from the NES version. 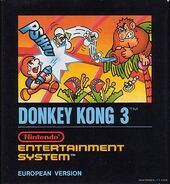 These screenshots were uploaded to the Video Game Museum in February 2001 and February 2002, respectively. 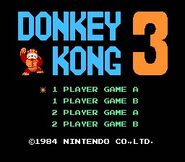