"O.K., kid, wipe that drool off your chin and listen up if you really want to learn something about this game. Sure, it's got newfangled computer graphics and what Diddy calls stereo sound that "rocks heavily and with little resistance!" But, the game play? Well, they finally added some proper challenge to the game - a snap for me of course. And the story? You sure ask a lot of questions, kid! Kaptain K.Roll and his cruelest cut-throat Kremlings have kidnapped that flea-bitten ape Donkey Kong. I figured I'd rescue him when the little pip-squeak DIDDY pops up along with his girlfriend, and they head off fixin' to prove themselves heroes or something. Come to think of it, I haven't laid eyes on those two for quite a while. I just may have to help them out after all!"

Note: I didn't say this; Cranky Kong did, because this was from the original box art.

Mario and Yoshi appear in the end sequence. 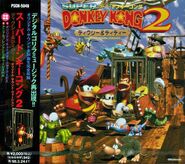 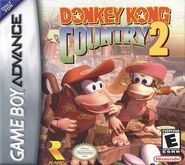 Add a photo to this gallery
Retrieved from "https://retromedialibrary.fandom.com/wiki/Donkey_Kong_Country_2:_Diddy%27s_Kong_Quest?oldid=63327"
Community content is available under CC-BY-SA unless otherwise noted.