Can Donkey Kong Jr. save his papa from Mario's prison? Mario has gone mad! He's turned the tables on Donkey Kong and locked him in a cage. It's up to you, as Donkey Kong Jr., to rescue your father by stealing Mario's set of keys. But it won't be easy. You'll have to fight off ape-eating Snapjaws, jump onto moving islands and break through a jungle of vines to get to the keys that will free Donkey Kong. Can you handle the action? Because this off-the-wall monkey business will have you going bananas!

In 1988, this game was re-released with Donkey Kong in a 2-in-1 video game cartridge titled "Donkey Kong Classics". The music from the title screen of this game will play after the demo gameplay of Donkey Kong.

After Donkey Kong Jr. catches his father and drives off with him, Mario chases after them, but then the next thing we see is that Donkey Kong's big foot sends Mario flying with a huge kick, and he runs away. In the NES version, he just dies. 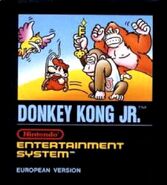 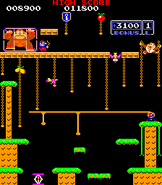 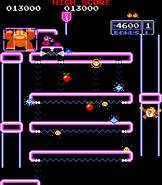 Five of these screenshots were uploaded to TMK on August 12, 1999.