During sales in late 1986, Dumbo was once again reduced to $29.95, but then returned to its original price of $84.95, again, in early 1987. It remained in shelves along with Alice in Wonderland and The Sword in the Stone in 1988 when all other past titles were vaulted. Dumbo was later re-packaged with new cover artwork in 1989 and 1991, when it was sold at $24.99 for each copy, then transferred to the Walt Disney Masterpiece Collection in late 1994.[2]

One of the true Disney masterpieces...the poignant animated classic about Dumbo, a baby elephant born with oversized ears. Snubbed and ridiculed by the other circus folks, he is befriended by a jocular mouse name Timothy. With luck, determination and an amazing amount of courage, Dumbo learns to soar as the high-flying star of the circus. Delightful, enchanting and touching, Dumbo remains one of the most popular, loveliest films from the master of animated entertainment.

In Japan, the 1995 VHS of this film was the last to contain the 1986 Walt Disney Home Video logo; therefore, starting with the 1998 VHS, the Disney Videos logo was in use with no changes to the film. 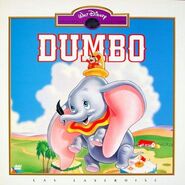