For the first time ever, in celebration of this landmark film's 70th anniversary, experience the daring adventures of the world's only flying elephant with a dazzling all-new digital restoration and brilliant Disney Enhanced High Definition Theatre Mix Sound. The inspirational tale of Dumbo, the courageous baby elephant who uses his sensational ears to soar to fame with the help of his clever best friend Timothy Q. Mouse, will thrill and delight audiences of all ages. And now, the award-winning music and empowering messages about friendship and belief in yourself reach new heights in this must-have Blu-ray high-definition presentation of Walt Disney s animated classic, Dumbo!

Let your spirits soar as you travel beyond the big top to Walt Disney's timeless classic! In celebration of this landmark film's 70th anniversary, Dumbo now includes a thrilling digital restoration and never-before-seen bonus features!

When Mrs. Jumbo's little "Baby Mine" finally arrives, Dumbo and his oversized ears become the talk of the circus. With the help of his loyal best friend, Timothy Mouse, a magic feather and a ton of courage, Dumbo uses his sensational ears to soar to fame as the world's one and only flying elephant!

Full of daring adventure, memorable characters, award-winning music and inspiring messages about the power of friendship and belief in yourself, Dumbo will become a treasured part of your family's collection of classic DVDs. 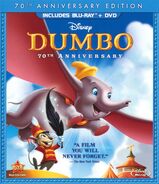 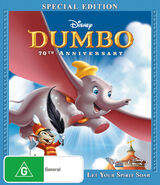 Retrieved from "https://retromedialibrary.fandom.com/wiki/Dumbo_(70th_Anniversary_Edition)?oldid=69940"
Community content is available under CC-BY-SA unless otherwise noted.