From the creators of Ice Age comes the year's funniest, most exhilarating animated adventure! Transported to a magical world, a teenager (Amanda Seyfried) is recruited by a nature spirit, Queen Tara (Beyonce Knowles), to help the "Leafmen" save their existence -- and ours -- from evil warriors. The whole family will love this fast-paced thrill-ride, with its astonishing animation and an all-star voice cast that includes Colin Farrell, Oscar Winner Christoph Waltz and Steven Tyler! 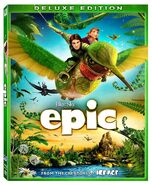 Retrieved from "https://retromedialibrary.fandom.com/wiki/Epic?oldid=66912"
Community content is available under CC-BY-SA unless otherwise noted.