English (Closed Captioned)
Fantasia's last theatrical re-release occurred on October 5, 1990 after undergoing a restoration process. It began printing on VHS in July 1991. The video sold over 14 million copies through 1992, and was never released on VHS again after that, making Fantasia the only animated film before Fantasia 2000 to only get one VHS release.

One day after its initial VHS release, a documentary called "Fantasia: The Cration of a Disney Classic" aired on the Disney Channel since then.

Walt Disney's most celebrated, most acclaimed and most requested film is finally here... Fantasia! This extraordinary blend of magnificent music and classic Disney animation is an exhilarating sight and sound experience that has emerged as a milestone in the history of motion pictures. Featuring a host of unforgettable images including Mickey Mouse as the Sorcerer's Apprentice, Fantasia has captivated generations of moviegoers all over the world. The breathtaking beauty, electrifying power and very speical magic of this timeless masterpiece are now yours to enjoy. See the music, hear the pictures, and share Walt Disney's greatest triumph... Fantasia! 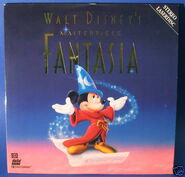