The story begins when two clownfish named Coral and Marlin give birth to 400 eggs. A barracuda appears from nowhere and kills Coral, along with almost all of the eggs -- except one. Marlin calls this last egg Nemo. Another morning. It is time to go to school. The whole class is with Mr. Ray, their teacher. Marlin is still worried that Nemo might get lost, so he goes after him all the way to the drop off. Nemo disobeys his father anyway and gets captured by scuba divers. Marlin tries to catch up with the boat but couldn't him. He then asks fish after fish, until he bumps into Dory, a blue regal tang. She cannot think for herself because she has a memory disorder. Along the way, they meet Bruce, Anchor and Chum, the sharks. Their pledge is that fish are friends, not food... until Marlin finds a mask and Dory bleeds. Bruce sniffs the blood and starts chasing the two little fish, realizing that they are food. As for Nemo, he ends up in a dentist's aquarium. He meets Bloat the pufferfish, Gurgle the royal gramma, Peach the starfish, Deb and Flo, the humbugs, Bubbles the yellow tang, and Jacques the cleaner shrimp. He is about to be a present for Darla, the dentist's niece. He then gets stuck, and a Moorish Idol named Gill appears. He tells Nemo that his fin is worse than Nemo's. Marlin and Dory get chased by an anglerfish after looking at a mask to see what it says ("P. Sherman, 42 Wallaby Way, Syndey"). Nemo is invited to the Tank Gang after swimming through the "ring of fire", and is now addressed as Sharkbait. Their goal is to escape from the tank. Meanwhile, Marlin and Dory are asking for directions on how to get to Sydney. They have to go past jellyfish, take a ride on the East Australian Current with sea turtles, and even get swallowed by a whale. The Tank Gang has to make the tank all filthy with algae so bad that the dentist must clean it. Darla arrives in the morning, and is about to receive Nemo as her present. In the end, Nemo is flushed down a drain and back to the ocean. He is now reunited with his father (but he meets Dory first), and learns that everyone must swim down to free themselves. Marlin tells Nemo that he met a sea turtle who was 150 years old. Even the little sea turtle, Squirt, becomes a student of Mr. Ray's class.

When Common Sense Media originally reviewed this film, it was given a 6+. However, the age rating was changed to 4+ in May 2007, then later to 5+. 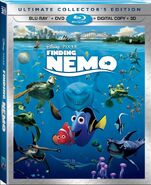