Harry Potter and the Sorcerer's Stone

Harry Potter and the Prisoner of Azkaban

One night, Harry finds Dobby the House Elf in his room. Dobby is doing everything he can to stop Harry from going back to Hogwarts. The Weasleys tempt to rescue him with a Ford Anglia, owned by their father. They travel to the Burrow, where the Weasleys live. New characters appear in this sequel, including Ginny Weasley as a Gryffindor student, as well as Draco's father, Lucius Malfoy, whom we meet at Diagon Alley's book store, Flourish and Blotts. The only thing we don't see is the inside of the Hogwarts Express, because of one thing -- Harry and Ron cannot go through the barrier, so after the train leaves, they use the Ford Anglia to get to Hogwarts. During their flight, they are spotted by several Muggles, and get hit by a Whomping Willow. As they enter, they both get detentions. Ron also gets a Howler from his mother. On Nick's Deathday Party, during Harry's detention, he hears a strange voice. In the second floor, there is a flooded floor, a Petrified cat, and a wall covered by a message written in blood. It appears that the cat, whose name is Mrs. Norris, was attacked by the monster summoned by the Heir of Slytherin. The second time this happens, it is at a Gryffindor student, named Colin Creevey. After the Dueling Club at night, Harry finds a Hufflepuff student, Justin Finch-Fletchley, also attacked by the monster. The last student to be attacked, is of course, Hermione. Harry and Ron discover that the monster is a basilisk. Another message is written on the wall, right before the student who wrote it was sent down into the Chamber. They follow her, and Harry defeats the Basilisk with Gryffindor's sword, and eventually defeats the Heir of Slytherin. 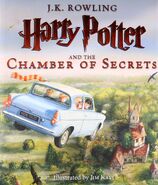 Illustrated version cover (2016)
Add a photo to this gallery
Retrieved from "https://retromedialibrary.fandom.com/wiki/Harry_Potter_and_the_Chamber_of_Secrets?oldid=63489"
Community content is available under CC-BY-SA unless otherwise noted.