Harry Potter and the Prisoner of Azkaban

Harry Potter and the Goblet of Fire

One day, Aunt Marge visits the Dursley family's house. After Harry loses his temper at her, she begins to inflate, and later floats away into the sky. Knowing he will be expelled, Harry runs away, and the Knight Bus takes him to the Leaky Cauldron. He meets Cornelius Fudge, the Minister for Magic. Harry turns out that he is not expelled, and stays in a room for the rest of the summer. Hermione now has a new pet cat, Crookshanks. As Harry, Ron and Hermione enter the Hogwarts Express, they find an asleep Remus Lupin. During their third year, Lupin is now the Defense Against the Dark Arts teacher, while Hagrid is the teacher for Care of Magical Creatures. In one class, Harry rides on a Hippogriff named Buckbeak. When Draco tries to pet the creature, he gets attacked. After around a month, Lupin becomes ill, and now Snape has to substitute for every class. After Christmas, Harry receives a Firebolt, as a replacement for his old Nimbus 2000 that got destroyed by the Whomping Willow. Around the end of the year, Buckbeak is sentenced to death, and the trio find themselves in the Shrieking Shack. Peter Pettigrew appears to be Scabbers as an animagus, Lupin becomes a werewolf, and Sirius Black is a black dog, the Grim. But with the help of the Time Turner, Buckbeak's life is saved, and he flies away with Sirius Black into the night sky. 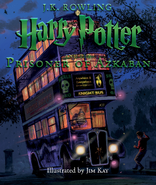 Illustrated version cover (2017)
Add a photo to this gallery
Retrieved from "https://retromedialibrary.fandom.com/wiki/Harry_Potter_and_the_Prisoner_of_Azkaban?oldid=63490"
Community content is available under CC-BY-SA unless otherwise noted.