Harry Potter and the Sorcerer's Stone

The story begins when Harry Potter was delivered to the Dursleys, after Harry's parents were killed by Lord Voldemort. Ten years pass, and Harry is almost 11 years old. It turns out that the Dursley family, especially Dudley, are treating him like a servant. They go to the zoo on Dudley's birthday, and with Harry's look, the snake's glass vanishes. Later in the summer, Harry gets letters from no one. Uncle Vernon is so upset, and forced his entire family (and Harry) to a hotel. In there, a Keeper of the Keys named Hagrid enters and gives Harry the same letter from before, informing him that he is accepted to Hogwarts. First, Hagrid and Harry buy the supplies at Diagon Alley, including his wand. On the day everyone goes to Hogwarts, Harry gets his ticket to Platform 9 3/4. He, along with two other students, Ron and Hermione, are sorted into Gryffindor, one of the four residents at Hogwarts. Meanwhile, another student, Draco Malfoy, is sorted into Slytherin. During class, one of the teachers, Professor Snape, mocks Harry as the "new celebrity". In the first flying class, Harry flies around on a broomstick, and later becomes a Seeker. In Halloween, Harry and Ron find Hermione in the girls' bathroom, where they fight off a mountain troll. The Quidditch season begins, and as a Seeker, Harry catches the Golden Snitch, ending the game. In Christmas, Harry looks through the Mirror of Erised, and sees his parents. One night, Harry and a couple of his friends wander around at night and receive detention in the Forbidden Forest. Another night, Harry, Ron and Hermione go through the trapdoor to find the Sorcerer's Stone. When Harry makes his way to the last chamber, he finds Professor Quirrell, who reveals himself as a man with two faces. 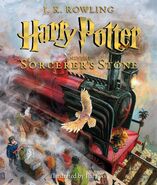 Illustrated version cover (2015)
Add a photo to this gallery
Retrieved from "https://retromedialibrary.fandom.com/wiki/Harry_Potter_and_the_Sorcerer%27s_Stone?oldid=63488"
Community content is available under CC-BY-SA unless otherwise noted.