VHS: Beauty and the Beast: The Enchanted Christmas
DVD: 101 Dalmatians

The first copies of the VHS were produced in December 1997.

Taken from the gods as a newborn, adopted on earth, Hercules becomes an awkward teenage pillar of strength. Trying to fit in, he discovers Zeus is his dad and home is on Mount Olympus - if he can move from "zero" to true hero! Hercules teams with Pegasus, the flying stallion, and Phil - a feisty personal trainer - for the mission. But it's no walk on Acropolis. He must match wits with Grecian beauty Meg and a comical hothead named Hades, who's having a devil of a time with his hostile takeover of the Universe. He's armed with morphing morons Pain and Panic for help, and only Hercules stands in his way!

With a bold animation style, colossal voice cast, and spectacular music, Hercules is unmatched in strength, delivering something for everyone with "pinwheeling, knockabout fun!" 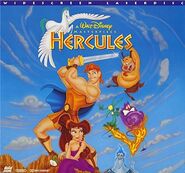 Retrieved from "https://retromedialibrary.fandom.com/wiki/Hercules_(1998_VHS/1999_DVD)?oldid=68394"
Community content is available under CC-BY-SA unless otherwise noted.