After 14 years of sales for the Gold Classic Collection DVD, Hercules was finally released on Blu-ray Disc on August 12, 2014.

Have a mighty fun time with Hercules, Disney's animated classic from the creators of Aladdin and The Little Mermaid. Nominated for an Academy Award (Best Music, Original Song, "Go The Distance," 1997), this legendary family favorite is packed with colossal laughs and nonstop adventure. Taken from the gods as a newborn and adopted on Earth, Hercules is just an awkward pillar of strength trying to fit in. What he wants most is to impress his father Zeus. When Hercules discovers Hades' sinister plot to take over Mount Olympus, he goes from zero to hero and, with the help of his pals Pegasus and Phil, discovers that real strength comes from the heart! 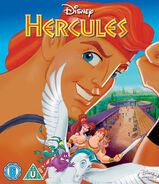 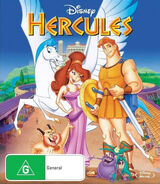 Blu-ray Disc cover (Australian version)
Add a photo to this gallery
Retrieved from "https://retromedialibrary.fandom.com/wiki/Hercules_(Blu-ray)?oldid=67712"
Community content is available under CC-BY-SA unless otherwise noted.