Horton Hears a Who! (TV special)

"Dr. Seuss's classic of a jungle elephant named Horton teaches us what it means to be a true friend. Hearing a faint cry for help from a floating speck of dust, Horton finds a tiny planet of Whos living there. Though he can't see them, he hears them for sure - and puts his safety on the line for the microscopic inhabitants. Thanks to Dr. Who-Vee and Horton, Whoville is saved and a lasting friendship is created. Dr. Seuss and animation giant Chuck Jones reteamed after How The Grinch Stole Christmas on this enchanting Peabody Award-winner with a message bridging generations: "A person's a person, no matter how small." Through its characters, charming songs and tongue-twisting versus, Horton looms large as a family-viewing treasure."

1982 VHS (with How the Grinch Stole Christmas)

1997 DVD (with How the Grinch Stole Christmas)

2000 DVD (with How the Grinch Stole Christmas) 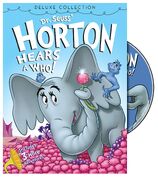 2009 Blu-ray Disc
Add a photo to this gallery
Retrieved from "https://retromedialibrary.fandom.com/wiki/Horton_Hears_a_Who!_(TV_special)?oldid=72549"
Community content is available under CC-BY-SA unless otherwise noted.