Your favorite Ice Age heroes are back and cooler than ever in this all-new animated adventure that's mammoth-sized fun for the whole family! Scrat's epic pursuit of the elusive acorn catapults him into the universe, where he accidentally triggers a series of cosmic events that threaten the Ice Age world. Now the entire herd -- including Buck, Manny, Ellie, Sid and Diego -- must work together on a hilarious journey filled with nonstop action and colorful new characters, in order to survive the global Scrat-tastrophe! 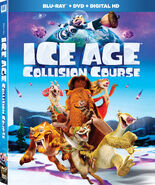