On April 20, 2012, Nintendo has announced that they will indeed release something for Kirby's 20th anniversary -- a Wii compilation disc containing all your favorite Kirby games. On May 16, 2012, the Weekly Famitsu Magazine has decided on which games will be part of this compilation disc, which appear to be, from left to right:

On June 6, 2012, it was announced that the final title for this collection will be Kirby's Dream Collection: Special Edition, with a new (and final) lineup for the Kirby games that will appear in the collection:

The first screenshots and the official Japanese cover artwork were unveiled on June 16, 2012, and the E3 trailer was released on June 21. The game was scheduled for a release in Japan on July 19, 2012, and in North America on September 16, 2012 (with a launch trailer four days prior to release).In this collection, there are 13 more Challenge Stages based on those from Kirby's Return to Dream Land. They are:

The third thing you'll see in this collection is Kirby's history -- a timeline documenting the Kirby games and some other merchandise. Hidden in this timeline are three episodes of Kirby: Right Back at Ya! -- Kirby Comes to Cappy Town (#1), Crusade for the Blade (#60) and Waddle While You Work (#72).

But that isn't all. There's also included a soundtrack CD with 45 tracks, and a 48-page celebration book containing lots more information about the Kirby series. And if you're lucky and you own the Japanese version, you'll get even MORE features, such as excerpts from the manga series.

So if you're a HUGE Kirby fan, then this game is definitely for you. 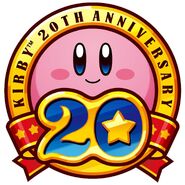 Either a fan-made or prototype logo for the game

Retrieved from "https://retromedialibrary.fandom.com/wiki/Kirby%27s_Dream_Collection:_Special_Edition?oldid=57613"
Community content is available under CC-BY-SA unless otherwise noted.