Kirby to the rescue! Dream Land is in peril! An evil king has stolen the magic Twinkle Stars. If they're not recovered, the people of Dream Land could starve. Meet Kirby, a roly-poly little hero, as he runs, jumps, floats, and swims in search of the treasured Twinke Stars. He'll puff his way through castles, caves, dungeons, and forests. In his path are many wicked and greedy enemies, but Kirby has a special way to defeat them! It's non-stop action all the way to the top of Mt. Dedede!

As a .GB ROM file

Digital MP3s of this soundtrack can be found at Kirby's Rainbow Resort as of May 7, 2006. 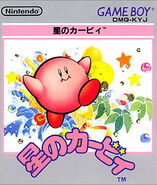 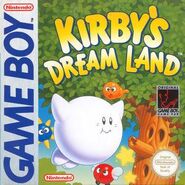 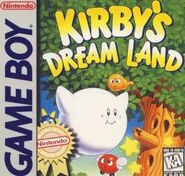 Instruction manual
Add a photo to this gallery

All screenshots were uploaded to Kirby's Rainbow Resort on August 6, 2004.

Retrieved from "https://retromedialibrary.fandom.com/wiki/Kirby%27s_Dream_Land?oldid=63280"
Community content is available under CC-BY-SA unless otherwise noted.