English (Closed Captioned)
Last released in theaters on December 19, 1986, Lady and the Tramp became the last title of the series to contain the 1984 Walt Disney Classics logo afterwards when released on video in 1987. Its closed captioning was made by The Caption Center at WGBH, the same company that did Sleeping Beauty.

Lady and the Tramp eventually became the best-selling videocassette of all time, selling 3.2 million copies. The sale for this VHS was withdrawn on March 31, 1988, as well as the contract with WGBH. After 1988, Disney signed a contract with Captions, Inc. Los Angeles, which would probably last until 2001.

When Lady and the Tramp was released on VHS, the most recent animated film to date at that time was The Great Mouse Detective, which sadly, did not get a VHS in 1987.

Generations of moviegoers have fallen in love with Walt Disney's renowned animated classic, Lady and the Tramp. Lady, a lovingly pampered cocker spaniel, and Tramp, a jaunty, freedom-loving mutt with a heart of gold, share an enthralling romance and thrilling adventures in this timeless story. Told through exquisite Disney animation and highlighted by memorable songs, this charming film features a cast of captivating characters -- from Peg, an ex-showgirl Pekingese, to Si and Am, two of the most devious felines ever to prowl across the screen. One of the greatest films of all time, Lady and the Tramp remains absolutely irresistible!

The Disney Channel aired Lady and the Tramp since May 7, 1988. 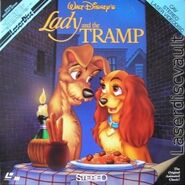 Lady and the Tramp (1990 VHS; Australian version)
Add a photo to this gallery

Retrieved from "https://retromedialibrary.fandom.com/wiki/Lady_and_the_Tramp_(1987_VHS)?oldid=72585"
Community content is available under CC-BY-SA unless otherwise noted.