Three... Two... One... GO! The signal light changes and you drop the pedal to the metal. Take on up to three friends in the split-screen VS games, or race solo in the Mario GP. Tell your friends to bring it on in the highly competitive Battle mode. Advanced features allow you to race with your "Ghost." The driving data from your best run appears as a transparent character on the screen. No longer must you simply race against the clock -- you can actually race against yourself!

A VHS tape titled "Mario Kart 64 Perfect Video" was released about a month after the North American release of the game. Like the Super Mario 64 VHS, it features the same host from that video and runs for 40 minutes in length, and was distributed by Pioneer, GTV, and Mario the Video.

Of the following facts, these show what is different in the Japanese version of Mario Kart 64: 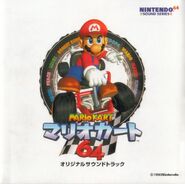 Title screen (after beating 150cc)
Add a photo to this gallery

Retrieved from "https://retromedialibrary.fandom.com/wiki/Mario_Kart_64?oldid=63414"
Community content is available under CC-BY-SA unless otherwise noted.