Note: From the iTunes copy of the film.

Join the "practically perfect" Mary Poppins (Julie Andrews) for a "Jolly Holiday" as she magically turns every chore into a game and every day into a whimsical adventure. Along the way, you'll be enchanted by unforgettable characters such as the multitalented chimney sweep Bert (Dick Van Dyke). You won't need a "Spoonful Of Sugar" to love every moment of this timeless Disney classic! 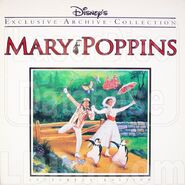 VHS cover (Gold Collection)
Add a photo to this gallery

2013-present
Add a photo to this gallery

Retrieved from "https://retromedialibrary.fandom.com/wiki/Mary_Poppins?oldid=63693"
Community content is available under CC-BY-SA unless otherwise noted.