English (Closed Captioned)
Mary Poppins is one of the most popular Disney films combined with live action and animation. All of the songs in this film were written and composed by Richard M. Sherman and Robert B. Sherman. The video was released on November 5, 1985 as part of the "Making Your Dreams Come True" promotion, and was re-printed several times -- in 1986, 1988, and 1990, all the way up to the Walt Disney Masterpiece Collection release in 1994.[1]

The closed captions were actually first seen on the back cover of the 1986 VHS.

Mary Poppins is unquestionagly Walt Disney's triumphant masterpiece. Julie Aadrews, in her Academy Award-winning performance, stars as the irrepressible nanny who soars out of the london skies and into the hearts of everone she ecounter. "Practically perfect in every way," Mary brings a carptbag of magical adventures into the lives of the Banks family on Cherry Tree Lane. An unparalleled blend of animation and live-action, dazzling dances, and an award-winning musical score makes Mary Poppins a joyous, timeless classic!

Winner of five Academy Awards, including Best Actress (Julie Andrews), Best Song ("Chim Chim Cher-ee") and Best Visual Effects, Mary Poppins has become one of Walt Disney's most fondly cherished film classics! High above the dawn clouds of London, "practically perfect" Mary Poppins flies out of the sky and into the lives of two playful children.  With the help of a carefree chimney sweep named Bert (Dick Van Dyke), the spirited nanny makes every chore a game and every day an adventure with rooftop dancing, a leap into an imaginative cartoon world, and a visit to a hilarious floating tea party, But it may take more than "A Spoonful of Sugar" to cheer up the children's prim and proper father! With its brilliant blend of live action, animation, breathtaking fantasy and memorable songs, there's only one word to describe Mary Poppins -- supercalifragilisticexpialidocious!

Mary Poppins aired on NBC for the first and only time on April 15, 1990. From there the film returned to The Disney Channel in late 1990, but was not rebroadcast by a major television network again until 2002. 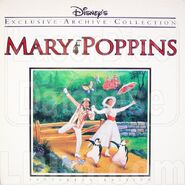