Every day, two monsters named Sulley, blue and furry, and Mike, who's green and one-eyed, go to a worker's place called Monsters, Inc., where all monsters scare children worldwide. Suddenly, Sulley lets out a kid into the monster world, not knowing that children can spread deadly diseases, even with a single touch. But it's up to the CDA to stop the spreading of the germs. Meanwhile, Sulley and Mike do their best to take care of the kid, and realize that she's not toxic at all. Sulley names her "Boo". Now they are trying their best to send her back, but Randall is after them. When Henry J. Waternoose also finds this out, he banishes Sulley and Mike into the human world. But they still come back, and find Boo's door in the door vault (they also send Randall away as well). Sulley even tricks Waternoose in the simulator room. When he finally puts Boo back into her room, he is sad that he'll never get to see her again... until he plans to rebuild the factory, with the Scare Floor now called the Laugh Floor. Mike even fixes Boo's door for Sulley, so that he could visit her again.

On October 17, 2000, the teaser trailer was attached to Toy Story 2 on home video. The first official trailer was first seen on Atlantis: The Lost Empire in theaters. Upon its theatrical release on November 2, 2001, Monsters, Inc. contained trailers for films like Fox's Star Wars Episode II: Attack of the Clones and Ice Age, Columbia's Stuart Little 2, and Disney's Peter Pan: Return to Never Land. 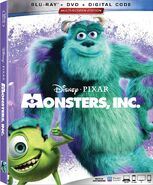