Honored with legions of critical acclaim, Disney's 36th animated masterpiece magically transforms an ancient Chinese legend into unparalleled fun and adventure that comes along but once every dynasty! Embraced for her lovable, spirited nature, Mulan is a young girl who doesn't quite fit into her tradition-bound society. When the invading Hun army comes charging over China's Great Wall, Mulan's aging father is ordered to battle! To spare him from harm, Mulan disguises herself as a soldier with a comical, ragtag troop, led by the courageous Captain Shang. Never far away are Mulan's hilarious guardian dragon, Mushu, and lucky cricket, Cri-Kee. But Mulan will need more than razor-sharp wit to defeat the ruthless Hun leader, Shan-Yu. Only by staying true to herself will she bring victory to her country and honor to her family! 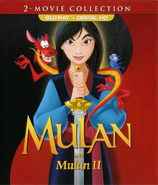 Netflix poster
Add a photo to this gallery

Retrieved from "https://retromedialibrary.fandom.com/wiki/Mulan?oldid=66457"
Community content is available under CC-BY-SA unless otherwise noted.