English SDH
My Little Pony: Equestria Girls: Legend of Everfree finished production on August 19, 2016. Copies of the DVD began production on September 14, 2016, and it was released on November 1, 2016.

What Could Be More Fun Than A Field Trip To Everypony’s Favorite Camp?

When Canterlot High School goes on a field trip to Camp Everfree, they're surprised to find a magical force is causing strange things to happen. Twilight Sparkle , with the help of the Mane 6 and especially Sunset Shimmer (who refuses to give up on her), must confront the dark "Midnight Sparkle" within herself and embrace her newfound magical abilities to save the beloved camp from closing down for good!

This DVD also includes a trailer for all of the first three Equestria Girls films. 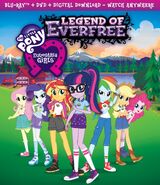 The home video trailer shown above was uploaded by Shout! Kids on October 3, 2016.

Five sneak peeks at the first 10 minutes of the film were uploaded to YouTube in August 2016. Animated shorts were originally planned to promote the film, but were canceled on August 24.

Five short video clips of characters and stuff only seen in this film were uploaded in October. They are:

These were the last official video clips uploaded by the series' old YouTube channel, as any further clips for newer installments were then uploaded by Hasbro, as explained by the channel itself in December 2016.

Retrieved from "https://retromedialibrary.fandom.com/wiki/My_Little_Pony:_Equestria_Girls:_Legend_of_Everfree?oldid=70706"
Community content is available under CC-BY-SA unless otherwise noted.