The opening animation shown above was the very first video ever seen online, on September 28, 2010.

These songs were dubbed in both Japanese and Korean:

This song was dubbed in Japanese but NOT in Korean:

These songs were NOT dubbed in Japanese or Korean:

From early in 2011 to the summer, clips of the first nine episodes were released on the official website:

In September, the episode "The Best Night Ever" was made available in its entirety. All videos remained online until the website was redesigned on December 10, 2011.

Prior to the premiere of the show itself, seven video clips, each focusing on a main character of the show, were seen on the official My Little Pony website. They are:

These video clips were first seen on September 28, 2010 on the official My Little Pony website, and they contain footage from the first four episodes of this season. They were later uploaded to YouTube on July 23, 2011. Another two months later, on September 22, a profile video clip for Spike was added.

This was the Hub Network's original promo for My Little Pony: Friendship is Magic, from December 22, 2010.

Halfway through this season, all further episodes were released on iTunes about 1-2 days after their debut on the Hub Network. The commercial shown below appeared on the My Little Pony website on February 28, 2011. 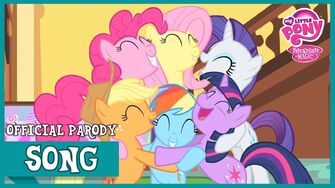 A California Girls parody music video aired on The Hub as of May 24, 2011, more than two weeks after the premiere of the Season 1 finale. Three days later, the extended version of this song was uploaded by Equestria Daily.

This video shows stages of how each episode of My Little Pony: Friendship is Magic is made.

This was one of the series' official YouTube channel's first videos on YouTube, uploaded on June 21, 2011. It was re-uploaded by Hasbro Studios Shorts in 720p HD on November 15, 2013.

Promo: "There's a Pony for That"

This promo for My Little Pony: Friendship is Magic on the Hub Network was uploaded on July 8, 2011.

On February 15, 2011, the show became first available in home media through iTunes. The original price was $69.99 -- very expensive for an entire season! Since then, new episodes have usually been released about 1-2 days after their television premiere.

Later in 2011, two DVDs were made, and they were only available in limited stores. The complete season boxset was released on December 4, 2012.

Complete season boxset
Add a photo to this gallery
Retrieved from "https://retromedialibrary.fandom.com/wiki/My_Little_Pony:_Friendship_is_Magic/Season_1?oldid=69723"
Community content is available under CC-BY-SA unless otherwise noted.