My Little Pony: It's a Pony Kind of Christmas

November 6, 2015
October 7, 2016
This holiday soundtrack album contains ten songs, with vocals from the cast of My Little Pony: Friendship is Magic. The first song of this album was uploaded to YouTube by Hasbro Studios Shorts on November 5, 2015, followed by the rest of the entire soundtrack (except for one song) on November 23.

On October 7, 2016, all songs from the Season 6 episode "A Hearth's Warming Tail" were added to the soundtrack. 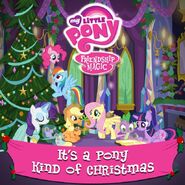 Original soundtrack cover (2015)
Add a photo to this gallery

It's a Pony Kind of Christmas (December 3, 2016)
Add a photo to this gallery
Retrieved from "https://retromedialibrary.fandom.com/wiki/My_Little_Pony:_It%27s_a_Pony_Kind_of_Christmas?oldid=46154"
Community content is available under CC-BY-SA unless otherwise noted.