65 (including the pilot episodes)

The show takes place in Ponyland, which is home to a bunch of magical creatures. In each episode, the ponies fight for their survival against wicked witches, goblins, and evil trolls. The TV series' first segment was titled My Little Pony 'n Friends, and the second segment featured a different cartoon.

Ponyland is a mystical land, home to all kinds of magical creatures. The Little Ponies make their home in Paradise Estate, living a peaceful life filled with song and games. However, not all of the creatures of Ponyland are so peaceful, and the Ponies often find themselves having to fight for survival against witches, trolls, goblins and all the other beasts that would love to see the Little Ponies destroyed, enslaved or otherwise harmed.

The show aired on South Korean terrestrial network MBC (Munhwa Broadcasting Corporation) from March 30 to June 14, 1989. All the characters and everything else was completely renamed, as if the show was a Japanese anime.

The DVD versions of all episodes were later transferred to video-on-demand service Kabillion, where the show remains today. 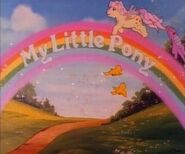 "Complete Series" DVD cover
Add a photo to this gallery
Retrieved from "https://retromedialibrary.fandom.com/wiki/My_Little_Pony_(G1)?oldid=73405"
Community content is available under CC-BY-SA unless otherwise noted.