English
NBC, abbreviated as the National Broadcasting Company, was founded in 1926. It launched on July 1, 1941 as the very first television network in the United States. The first of their in-credit text logos debuted on May 7, 1947, with Kraft Television Theatre.

The "Peacock" logo was introduced in 1956, to increase color programming on the network. Color television became more popular since September 24, 1961, when Walt Disney's Wonderful World of Color premiered on NBC, which was replaced by The Wonderful World of Disney in September 1969.

The next logo, known as the "Trapezoid N", debuted on October 11, 1975, with the first broadcast of a comedy series called Saturday Night Live.

The last of the Walt Disney anthology series to air on NBC was Disney's Wonderful World, from 1979 to 1981. When this show premiered, NBC's logo changed again, to combine both the "Trapezoid N" and the return of the Peacock logo, to make a brand-new logo called the "Proud N".

The current logo debuted on May 12, 1986 on the TV special, NBC 60th Anniversary Celebration.

As of 2004, NBC is now a subsidiary of Universal Studios, marking the establishment of NBC Universal Television Distribution (now NBCUniversal Syndication Studios).

On June 26, 2009, after two weeks of repeatedly showing public service announcements about the digital television transition that ended on all full-power stations at that time, the analog signals of NBC's very first TV station, WNBC, signed off at 11:00 a.m. with a montage of the network's five logos shown below in backwards order, and finally, to the word "GOODBYE", before cutting to static. On digital TV sets, the analog signals usually cut to a blue screen of death, while the digital signals (including those from all converter boxes and DVRs) continued to carry regular NBC programming, whereas they were seen on Channel 4.1. 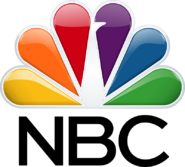