English (Closed Captioned)
Oliver & Company was re-released in theaters on March 29, 1996, and was announced for a home video release in the Fall on April 24, 1996, when The Aristocats shipped to stores. Oliver & Company first appeared in stores on September 24, 1996. This film, along with all the other Masterpiece Collection titles released exclusively in 1996 (Pocahontas, The Many Adventures of Winnie the Pooh and The Aristocats), were discontinued as of April 30, 1997.

Disney’s 27th full-length animated masterpiece is "Oliver" with a twist -- artfully blending lovable characters, cool songs and action-packed adventure into a contemporary classic that’s "charming, funny, musical and thrilling"! (ABC-TV) Disney’s hip high-energy tale begins in the concrete canyons of New York City, where Oliver, an adorable orphaned kitten, is befriended by Dodger, a carefree mutt with a certain street savoir faire. The mischievous little cat is welcomed by Dodger’s pack of pickpocket pooches, including dim-witted Einstein, ravishing Rita and live-wire Tito. This ragtag family of misfits runs into trouble when the evil mastermind Sykes -- aided by his two daunting Dobermans -- schemes to kidnap the lonely little rich girl who just adopted Oliver! It’s up to the brave kitten and his newfound friends to race to the rescue in an electrifying chase through the city’s subway system. Boasting five outstanding original songs, the most famous musical talent of any Disney animated feature -- including Billy Joel, Bette Midler and Huey Lewis -- and overflowing with brilliant animation, Oliver & Company is a modern masterpiece you can now add to your Disney collection.

Notice: The actual fact about Oliver and Company is that it was available on VHS in Australia in September 1997, the same date as the UK release. As evidence, this preview for the film was found on the Australian video releases of James and the Giant Peach (1996) and Sleeping Beauty (1959). 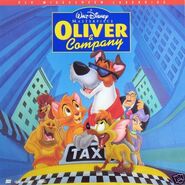 VHS cover (French version)
Add a photo to this gallery

Retrieved from "https://retromedialibrary.fandom.com/wiki/Oliver_%26_Company_(1996_VHS)?oldid=72612"
Community content is available under CC-BY-SA unless otherwise noted.