Motion picture films
Paramount Pictures was founded on May 8, 1912 as Famous Players Film Company. The name "Paramount Pictures" was adopted in 1916. Today, Paramount is the last of the "Big Six" major film studios still headquartered Los Angeles, California, in the Hollywood district. 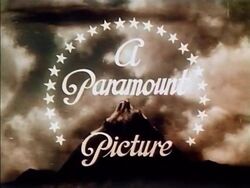 One of the first films seen on VHS in May 1980 with this logo intact was Animal Crackers (1930). However, the tape was distributed by MCA Home Video. As a result, any films with this logo will usually always include a Universal logo as well.

In 1966, Paramount was sold to Gulf+Western Industries Corporation. Since then, for more than 20 years, Paramount was known as a "Gulf+Western company", as seen on the byline in this logo. Films with the 1968 logo include Romeo and Juliet (1968), Love Story (1970), The Godfather (1972), and the family classic Charlotte's Web (1973). The logo ended with Three Days of the Condor and the end of Cars Maternational Championship both released on September 24, 1975 (the latter was the first film to have the blue mountain at the beginning).

In use since October 8, 1975, for 11 years, starting with Mahogany (1975), this next Paramount logo was seen on films from the mid-1970s to the mid-1980s. This logo was also the first to appear on original VHS prints of current films from back then.

Starting from this year onwards, television variants of further Paramount logos were also made.

During Paramount's last years as a Gulf+Western company, a brand-new logo was unveiled, which first appeared at the beginning of The Golden Child (1986). Like many other logos, the words "75th Anniversary" appear during the logo's first year, and was seen on films until February 5, 1988. Examples of other films with this logo containing the "Gulf+Western" byline are Fatal Attraction (1987), Planes Trains and Automobiles (1987), Coming to America (1988), and Indiana Jones and the Last Crusade (1989).

After Paramount Communications was acquired by Viacom in 1994, all films and VHS tapes affiliated with Paramount Pictures contained the byline "A Viacom Company" beginning on February 17, 1995.

A lot of events occurred to Paramount's films designed for family audiences alongside production of My Little Pony: Friendship is Magic.

Retrieved from "https://retromedialibrary.fandom.com/wiki/Paramount_Pictures?oldid=73585"
Community content is available under CC-BY-SA unless otherwise noted.