Take to the skies for the most magical, musical animated adventure of all time with the one and only Peter Pan! Based on the beloved story by Sir James Barrie, this timeless tale springs to life with breathtaking artistry, memorable songs and unforgettable characters. Join the mischievous Peter Pan, the young boy who refuses to grow up, his hot-tempered pixie companion, Tinker Bell, and the wider-eyed Darling children as they battle the most notorious, uproarious villain of them all, Captain Hook! Just take the second star to the right and go straight on till morning and you too will reach the wonderful world of Never land... for once you let your heart take flight, you can never grow old!

Bill Thompson as Mr. Smee and the Pirates

June Forey as Squaw and Mermaid

Margeret Kerry, and Lucille Bliss as the Mermaids

Don Barclay and Jack Mercer as Indians and Pirates 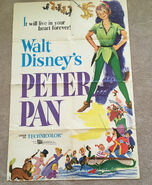 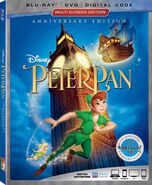