When someone is sad, when her friends ignore her parties, spiders

Andrea Libman
Shannon Chan-Kent (singing voice)
To say that Pinkie Pie marches to the beat of her own drum is certainly an understatement! Giggly, playful and brimming over with energy, it's not unusual to find this pink pony prancing and skipping joyfully through the streets looking for fun, doing cartwheels, singing a song in a silly voice and making up her own ridiculous lyrics. By far the silliest pony around, nothing makes her happier than evoking a giggle and a smile from her friends. She is the freest of free spirits, always acting on her whims, following her heart, talking your ear off and getting a laugh or two along the way.

Note: This was from the official website at Hasbro.com.

My Little Pony: Friendship is Magic 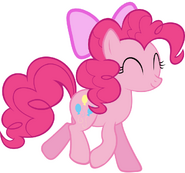 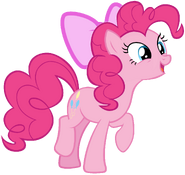 S1E10: Swarm of the Century

S2E19: Putting Your Hoof Down

S2E24: MMMystery on the Friendship Express

S3E03: Too Many Pinkie Pies

S5E05: Tanks for the Memories