Count the number of truly classic animated films and the list would begin with Walt Disney's Pinocchio. C. Collodi's brilliant story of a little puppet who dreams of being a real boy unfolds as a shining example of vivid, rich, detailed Disney animation at its finest! An unforgettable cast of characters includes the spry Jiminy Cricket; kindly old Geppetto; the sneaky J. Worthington Foulfellow; a terrifying whale named Monstro; and, of course, the little puppet made of wood, Pinocchio. Coupled with the haunting theme song "When You Wish Upon A Star," you have a timeless, unparalleled film adventure for anyone who has a dream in their heart. 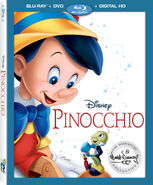