English (Closed Captioned)
After its successful theatrical re-release on December 21, 1984, Pinocchio was released on home video on July 16, 1985, as announced in May of the same year. Its list prices for VHS and laserdisc were the same as Robin Hood -- $79.95 and $34.95, respectively. However, starting on December 3, 1985, the price temporarily dropped to $29.95. This price was only valid through February 28, 1986. The video then returned to its original price afterwards, and the video continued sales through April 1987.

Count the number of truly classic animated films and the list would begin with Walt Disney's Pinocchio. C. Collodi's brilliant story of a little puppet who dreams of being a real boy unfolds as a shining example of vivid, rich, detailed Disney animation at its finest! An unforgettable cast of characters includes the spry Jiminy Cricket; kindly old Geppetto; the sneaky J. Worthington Foulfellow; a terrifying whale named Monstro; and, of course, the little puppet made of wood, Pinocchio. Coupled with the haunting theme song "When You Wish Upon A Star," you have a timeless, unparalleled film adventure for anyone who has a dream in their heart.

Pinocchio aired on cable television for the first time on The Disney Channel on September 19, 1986. 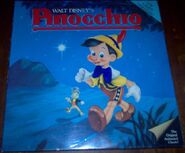 Pinocchio (1988 VHS; Japan)
Add a photo to this gallery

Retrieved from "https://retromedialibrary.fandom.com/wiki/Pinocchio_(1985_VHS)?oldid=72580"
Community content is available under CC-BY-SA unless otherwise noted.